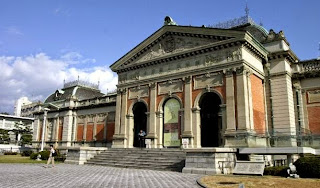 The Kyoto National Museum presents a collection of very rare and beautiful artifacts from Japan and other Asian countries. While it primary focuses on the millenium when Kyoto was the Capital of Japan (from 794 to 1868), you can also admire there more ancient pieces of arts as well as weaponery.

The main building (see the picture above) opened in 1897, under the reign of the Emperor Meiji. This building, designated an Important Cultural Property in 1969, is used today for special exhibitions, such as "Eitoku's Legacy".

Until May,17th 2015, you can have the chance to admire the work of the Kano Painters, members of the famous Kano School, a group of Japanese painters, supported by the Shogunate. After the death of the leader Kano Eitoku in 1590 and the Siege of Osaka in 1615 (marking the beginning of the Tokugawa's reign), the School suffered an important internal crisis. This exhibition shows the change of perspective taking by the painters under the new Rulers, "from bold dynamism to lavish splendor".

Review
While it may be difficult for people not aware of Japanese History and Arts to really understand how the political crisis at that time influenced painters of the Kano School, one can simply be amazed by the talent and the sense of details these Painters had. The choice of colors and gold magnified scenes of everyday life, and the exhibition also diplayed portraits of famous people, such as Oda Nobunaga.
The general part of the museum is also stunning, from the weaponery (extremely well preserved) to the ancient Kimono, and the Buddhist Statues. 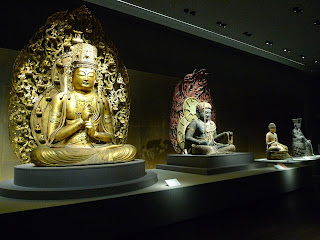 These exhibitions are a "must-seen" for all Arts and History Lovers, but also for the general audience willing to go back to these times where Kyoto was the capital-city of Japan.